Studio bookings, concert postponements, drive-in concerts and a rogue political show: As the nation attempts to reopen following a pandemic-related lockdown, the country industry is struggling to keep the music playing in a marketplace with a hazy immediate future.

Nashville’s recording studios, which shut down in March, appear ready to open again. Producer Jon Randall (Parker McCollum, Dierks Bentley) has his first session in months on the books for the second week of June, a sign that studio owners and managers believe they have the ability to prevent the virus’ spread.

But the timeline for the return of live shows is a mixed bag of conflicting ideas. Kenny Chesney, Maren Morris and George Strait all announced May 14 that their 2020 dates were postponed until next year. The same day, Keith Urban played an exclusive drive-in concert in Watertown, Tenn., for healthcare workers from Nashville’s Vanderbilt University Medical Center in a socially distanced setting for about 200 people at a venue that was otherwise considered outdated.

Urban is hardly alone in his thinking. Indie band The Davisson Brothers booked a drive-in concert for June 13 in Shinnston, W.Va., while The Eli Young Band will launch a Concert in Your Car series on June 4 at Globe Life Stadium in Arlington, Texas. That EYB show is followed by three more nights of parking-lot performances: Whiskey Myers on June 5, Pat Green on June 6 and Josh Abbott Band and Kevin Fowler on June 7.

The postponements and the birth of drive-in concerts necessarily accommodate a smaller number of customers, reflecting both logistics and consumers’ reticence to put themselves at risk. SmithGeiger executive vp digital media strategies Andrew Finlayson unveiled data during a May 12 Country Music Association webinar that showed roughly half of the population is “very concerned” about contracting COVID-19. As a result, 60% or more of respondents are staying home and/or avoiding crowds and public gatherings.

Additionally, one-third of those surveyed said they expect it to take six months or longer for life to return to normal, including 7% who believe the world will never be the same again.

It’s a lot to overcome, though some industry members are willing to step gingerly, even now, into the live arena. Although it will defy the state’s stay-at-home orders, Collin Raye agreed to a May 30 concert in Kaysville, Utah, in support of a political candidate. And tickets are still on sale for the Pepsi Gulf Coast Jam in Panama City Beach, Fla., to be headlined by Luke Bryan, Brad Paisley and Lynyrd Skynyrd Sept. 4-6. The festival has added such safety features as extra hand-washing stations and daily sanitization steps.

Meanwhile, even when the world returns to its previous state, there could still be a “new normal” in place. The SmithGeiger study showed that after a month of stay-home restrictions, Americans are increasingly anticipating the return of most public activities. One that most are not looking forward to: going back to the office. Only 21% thought positively of heading into a shared workplace, a sign that after the coronavirus forced them to do their jobs at home, many have discovered they no longer need to leave the house to be productive. 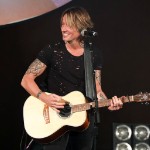